It is Banned Books Week, and that means I’m going to have a couple of posts talking about some of these books that have been challenged and/or banned. As in, people have filed complaints suggesting that certain books be removed from libraries and/or schools for varying reasons.

Today I’m talking about those reasons, while also mentioning a few popular books that have made it on the challenge lists and banned lists in places. You may be surprised at some of these books, but then again, maybe not.

Anyway, the important part of all of this is that we need to speak out for the freedom to read and against censorship. If there is a book that has certain themes or ideas that go against your beliefs then it is your right to choose not to read them. If you are a parent and you don’t want your child to read a certain book because of what you think is contained within the pages, it is your right to make that choice for your child. What is not okay is then thinking that you need to remove the book from the shelves so that nobody can read it.

As readers we know that we have varied tastes and not all books are going to appeal to every reader. What I have experienced through all these blog posts and all the different comment conversations with so many of you, is that we are capable of accepting that someone else feels differently about a book than we do.

Which means that honestly it is up to us, as well as librarians, teachers, and other book industry professionals to speak up about the issue of banning books and to fight against those who are trying to censor what the public has access to when it comes to reading materials.

Here is part of an infographic taken from the American Library Association (ALA). It is a nice little word cloud that talks about some of the main reasons why people file challenges against books. I find a number of these ridiculous when you consider that a great deal of these reasonings are on the television news or brought up in TV shows or movies on a consistent basis.

Violence, profanity/offensive language, racism, nudity, death, drugs, political viewpoint, abortion, sex education, excessive police force, lgbt…these are all parts of the reality of society today. It does us no good at all to try and bury our heads in the sand or put on blinders. Ignoring the reality of the world helps nobody. 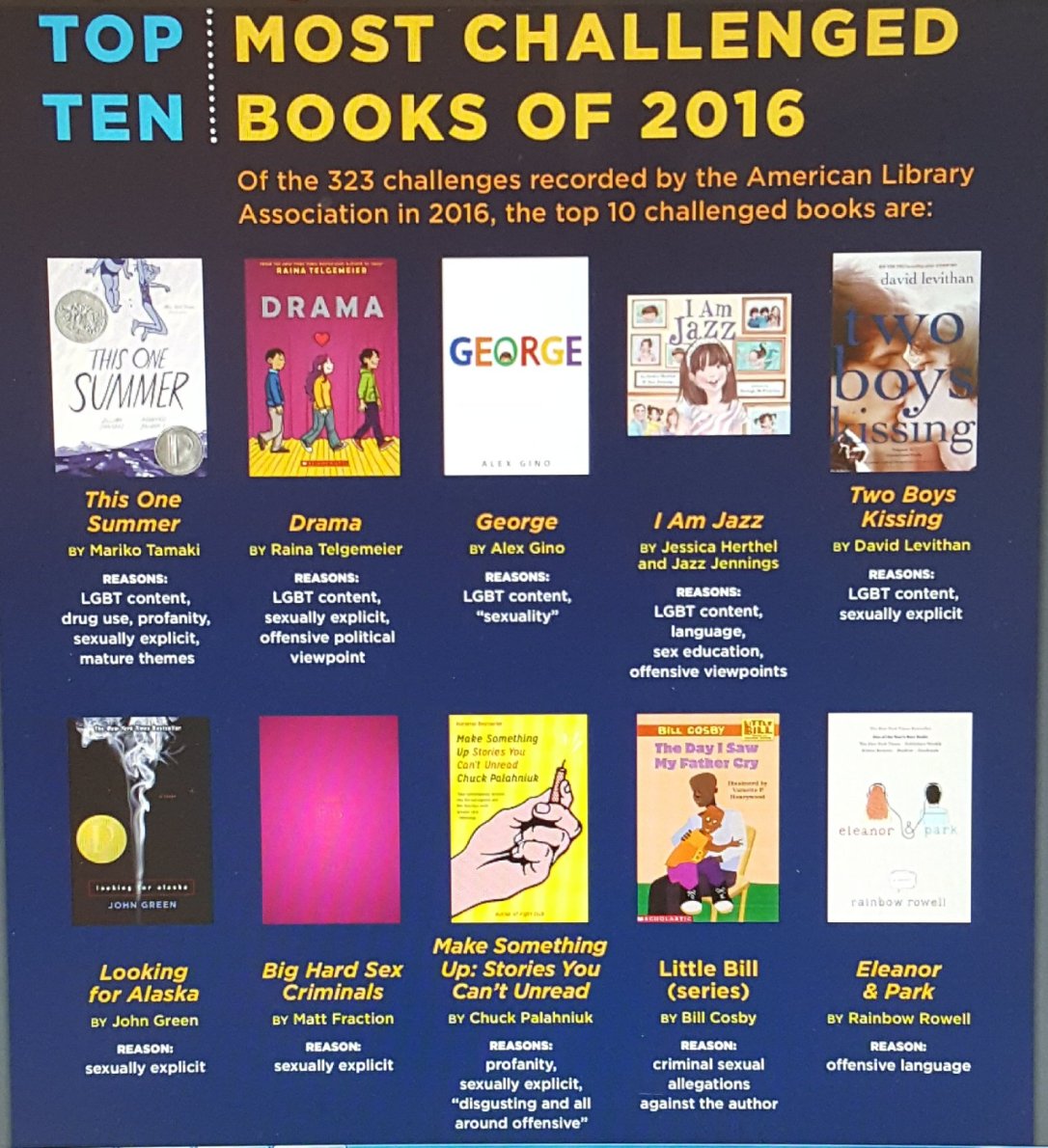 This is from that same ALA infographic and it has a list of the top ten challenged books in the year 2016, as well as why they were challenged. As you can see LGBT content is mentioned in half of the books, and half are because they are “sexually explicit.” Then you have a book by Bill Cosby that was challenged simply because of the criminal allegations against the authors.

Here are some other books that have been challenged over the years, as well as the reason for the challenge.

Now, I remember discussing Banned Books during some of my library science courses, and not all that surprising is the fact that a lot of the people filing challenges about books have actually not read any of the book they are challenging. They challenge Harry Potter because the characters are witches and wizards, and they claim that the series is about the occult and Satanism, but those of us who have read the books know better.

Books like The Color Purple, To Kill a Mockingbird, Of Mice and Men, and The Adventures of Huckleberry Finn all detail how life was in earlier times of history, and yet people want to challenge them for offensive language and racism. The fact is that these books give us modern readers a better understanding of what life was like then. I remember in the past few years there was a big hoopla around both Tom Sawyer and Huck Finn, wherein new versions were being printed. These new versions were “sanitized” by removing every instance where the word “nigger” appeared. Now I admit that I am not exactly a fan of that word, but that doesn’t mean I want to try and erase it from history or the reality of society.

Obviously, the topic of banned books is one that we need to keep bringing up, and not just during Banned Books Week. If you would like more information about this week, you can go to the ALA’s page on the topic. You can even find lists of frequently challenged books here. There are numerous resources to be found on the ALA page and I highly recommend checking all of them out.

Thanks for reading and I’ll have another Banned Books Week post up in a couple days.

12 thoughts on “Why Are Books Banned?”