Welcome back to another Monday of talking about manga. I have really enjoyed getting into manga over the past year…or getting back into it. Because many years ago, I did read quite a few volumes of Fullmetal Alchemist, which was a series I very much enjoyed (and plan to definitely reread). And one of my favorite new manga series has to be the one I am talking about today, because I truly do like reading about superheroes and I also do seem to have fun reading about kids/teens with magic/superpowers/etc who are in a school to learn how to use those skills. 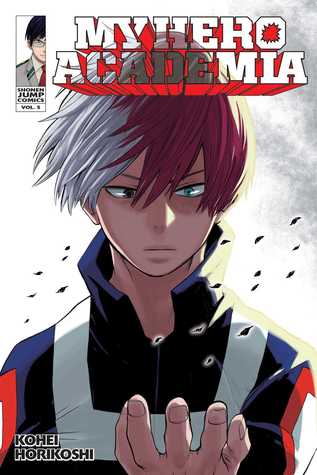 What would the world be like if 80 percent of the population manifested superpowers called “Quirks”? Heroes and villains would be battling it out everywhere! Being a hero would mean learning to use your power, but where would you go to study? The Hero Academy of course! But what would you do if you were one of the 20 percent who were born Quirkless?

The final stages of the U.A. High sports festival promise to be explosive as Uraraka takes on Bakugo in a head to head match! Bakugo never gives anyone a break, and the crowd holds its breath as the battle begins. The finals will push the students of Class 1-A to their limits and beyond!

This is the volume that wraps up the U.A. High sports festival, and though that story arc concluded it just left me wanting more of the series. In this final stage of the sports festival we get to see a bit more into the personalities and backstories of some of the characters, and learn more about their motivations.

As always we get to see Bakugo’s explosive personality, which while I personally don’t like him very much because I think he’s a jerk, I totally understand why his character is this way, so he is not really a bad character. Honestly, his character arc may end up being one of my favorites by the end of the series; it really depends on what happens as he continues to develop.

Todoroki continues to be a character I enjoy, and it is awesome that he is on the cover of this volume. There is a lot more he has to learn about using his quirks, and again, he is one who I think will have a pretty darn interesting character arc.

The action continues to be awesome and entertaining in this series, and I like how there is a pretty good balance of the action and also character and quirk development and growth. Also, I feel like this is one of those school set series where we do get to follow them to a number of lessons and training sessions, which is really nice.

And with the sports festival finished, we’ll get to move on to the students having internships with licensed heroes, where you know they will likely learn a lot…and probably get into a little trouble along the way.

You can pick up a copy of this fifth volume (or any of the other released volumes) from Amazon, Barnes & Noble, Books-a-million, Book Depository, or your local indie bookstore.