Continuing on with reviews for books I’ve read for GLBT Book Month, today I actually bring a review for a book I was granted early access to through NetGalley. As always, I must state that this privilege of reading the book early did not affect my rating or opinion in any way. Of course, a huge thank you to both NetGalley and Skyhorse Publishing for approving me for this book.

I was intrigued for this book because it had a cross-dressing main character, the promise of a same sex romance, and above all, pirates. 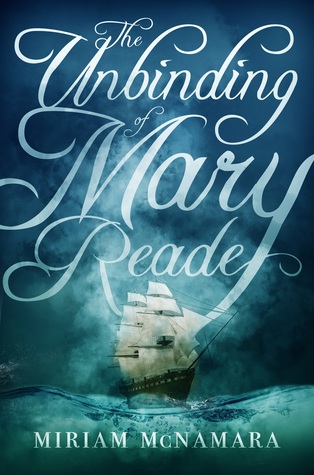 A clever, romantic novel based on the true story of a girl who disguised herself as a boy to sail with the infamous pirates Anne Bonny and Calico Jack—and fell in love with Anne Bonny.

There’s no place for a girl in Mary’s world. Not in the home of her mum, desperately drunk and poor. Not in the household of her wealthy granny, where no girl can be named an heir. And certainly not in the arms of Nat, her childhood love who never knew her for who she was. As a sailor aboard a Caribbean merchant ship, Mary’s livelihood—and her safety—depends on her ability to disguise her gender.

At least, that’s what she thinks is true. But then pirates attack the ship, and in the midst of the gang of cutthroats, Mary spots something she never could have imagined: a girl pirate.

The sight of a girl standing unafraid upon the deck, gun and sword in hand, changes everything. In a split-second decision, Mary turns her gun on her own captain, earning herself the chance to join the account and become a pirate alongside Calico Jack and Anne Bonny.

For the first time, Mary has a shot at freedom. But imagining living as her true self is easier, it seems, than actually doing it. And when Mary finds herself falling for the captain’s mistress, she risks everything—her childhood love, her place among the crew, and even her life.

Breathlessly romantic and brilliantly subversive, The Unbinding of Mary Reade is sure to sweep readers off their feet and make their hearts soar.

Here’s what I liked about this book: it started right in the middle of action, as pirates boarded the ship Mary/Mark was on. That was pretty cool, and I admit to being as intrigued as our main character was upon seeing a woman in a dress seemingly an equal with the rest of the pirate band.

But first impressions can sometimes be wrong, and nothing is really as it seems with this story. Honestly, in a number of ways I felt sorry for Mary, for the life she basically had forced on her because of her mother. Mary spent a majority of her life pretending to be Mark, and that constantly acting like a boy seemed to have altered how she thought and acted a great deal of the time.

Mary’s secret was revealed to the pirates rather early on in the book, and I was expecting that tension of keeping such a huge secret would have held out a bit longer, and the revelation left me wondering just what would happen for the rest of the pages.

Sadly, the deeper I got into the story, the less interested I became. Many of the characters felt fairly shallow to me, and I could not stand how whiny and wishy-washy Anne was. The relationship between Mary and Anne never felt like there was any sort of deep romantic connection, just two people who were together when they had no other options. Anne consistently went back to Jack, and Mary kept pining for her best friend Nat.

I wanted more action, more pirate-y adventure, and I certainly wanted a great romance. Sadly this book did not meet the expectations I had built up for it based on the summary. So I’m sure there will be people out there who really love this book, and who will connect with the characters and the story. I think overall it is worth a read, purely for the Mary/Mark story and portrayal. That was well done, and probably the most intriguing part of the story.

This book is now available, so you can pick up your own copy from Amazon, Barnes & Noble, Books-a-million, Book Depository, or your local indie bookstore.

7 thoughts on “Review: The Unbinding of Mary Reade by Miriam McNamara”