Hey guys once again throwing out another manga review for your viewing pleasure. Its been a crazy holiday so far and the shopping has been ridiculous. However I managed to get most of my shopping done this weekend. Okay so this is another one i picked up on a whim as has been the case with most of the ones I’ve started reading recently trying to expand on the my reading list a bit. Though I doubt my list will ever be as expansive as my fiance’s. Anyway I picked up a couple of books I am looking forward to reading  so I’ll get started with the review of Smokin’ Parade Vol. 1. 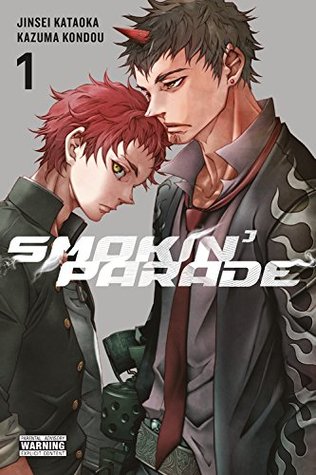 Youkou has spent much of his young life caring for his wheelchiar-bound sister, Mirai. But now the revolutionary new medical techniques developed by Amenotori company have given Mirai not only a new pair of legs but also her freedom- and perhaps something more…Rare but serious side effects may include mindless acts of extreme, grotesque violence! Enter the Jackalopes, an elite squad fighting to expose Amenotori’s secrets and rescue its victims! But even if Youkou joins the mercenaries, can anything be done to save his sister?

This one was a very interesting read that left me, quite honestly not sure whether I wanted to continue. Now this is not because it was bad, but the violence in this manga may not be for the faint of heart. I simply did not expect it to go from 0 to 9000 when it came to what happens to these people because of this Amenotori company. What happens to though gives me a “5 Nights at Freddie’s” vibe and though I’ve never played those games, just watched reaction video’s and live stream play. Just like the back cover says, this is a manga that is intended for Mature audiences only. I usually have a stomach for violence, at least in movies but this one goes above and beyond a bit and I can say I think it was the surprise of how grotesque and extreme the violence got so quickly in the story was what threw me off. It is not at the top of my list of manga to continue, however I will indeed be purchasing the next ones at later dates.

View all posts by damiantrypp