Oh man, things are going to be a bit chaotic over the next month or so. I am going to try my best to keep up with my post schedule. But be forewarned, if I miss any posts it’s because things are getting very busy for myself and Damian. We got the official word that we will be closing on our house on March 15th. So the time leading up to that will mean a lot of packing and cleaning around our apartment. And then between March 15th and March 31st we’ll have to move all of our stuff into the house, because we cannot maintain both the house and the apartment at the same time. It’s exciting and yet stressful at the same time.

But I’m looking forward to doing so much more after we get moved in. Damian and I are even trying to get everything figured out for us to have a wonderful nerdy and bookish YouTube channel. Oh, and I’ll also be doing a new library tour…or possibly just a house tour in general once we’re settled in.

So it’s exciting, but we’re here to talk books, so let’s jump into today’s review. 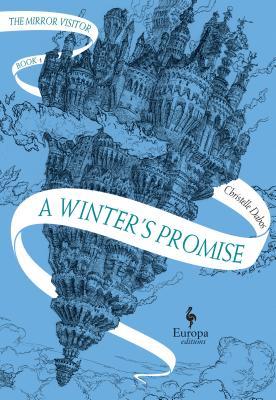 Volume 1 of The Mirror Visitor Quartet

Where once there was unity, vastly different worlds now exist. Over each, the spirit of an omnipotent and immortal ancestor abides.

Long ago, following a cataclysm called the Rupture, the world was shattered into many floating celestial islands, known now as arks. Ophelia lives on Anima, where inhabitants can read the pasts of objects. What’s more, she is also a “mirror-traveler,” possessing an ability that has been passed down to her through generations. Her idyllic existence on Anima is disrupted when she is promised in marriage to Thorn, an influential member of a distant clan. Still only a girl, Ophelia must leave her family and follow her fiancé to Citaceleste, the capital of a cold and icy ark called Pole. But there, her future husband seems indifferent to her and she slowly realizes that her presence on Pole is part of a much bigger plot and has far-reaching ramifications not only for her but for her entire world.

An unforgettable heroine, an insightful study of relationships, a rich and bountiful universe, intrigue and suspense, A Winter’s Promise is perfect for readers of Margaret Rogerson, Scott Westerfeld, Melissa Albert, and N.K. Jemisin

I heard about this book while watching Regan’s (aka PeruseProject) channel on YouTube, and it sounded interesting. So that plus hearing Regan talk so positively about it made me want to pick it up. Then, while I was reading it, I was approved by the publisher via NetGalley for the sequel. And honestly, knowing I can immediately continue with a book if I like it actually makes me more excited.

Was this book intriguing? Yes. And was it different from the typical fantasy or any other book that I would read? Well, yes, but that’s because it is a translated work. There is a difference in flow and book structure and sentence/paragraph structure with a translation that is obvious to me as someone who a vast majority of the time reads books originally written in English. I’m not saying this as a negative, but it is just a different feel. It takes me a bit longer to get used to a book if I have to mentally adjust.

It is worth it though. I thought that the world and the characters were pretty cool. The more fantasy I’ve read and the older I’ve gotten, I’ve come to realize that I really like books with good political intrigue, interesting cultural and religious themes, and even colliding cultures. I also like when a partnership or relationship develops between two people from different lands, and seeing how they learn about each other and teach each other and change each other. It’s fascinating to me.

So I enjoyed this book, even though it took me a little while to settle in to the characters, the world, and the general story. I’m really looking forward to the sequel, which will be release April 30th, 2019, in English.

You can pick up this novel from Amazon, Barnes & Noble, Books-a-million, Book Depository, or your local independent bookstore.