I’m a little sad that I didn’t have any posts go up over the weekend, but at the same time, I think that’s how things are mostly going to be going forward. At least for the next month or so, weekends will be spent with a lot of packing and cleaning, and then moving. As weekends were typically when I would do my blog prep for the entire week, it’s going to make me adjust my blogging schedule for a little bit. I will figure it all out, I promise.

Anyway, let’s jump into today’s review. I discovered this manga thanks to a B&N article about manga that would appeal to fans of D&D. Honestly this one sounded like an amusing dungeon adventure, so I definitely wanted to check it out. 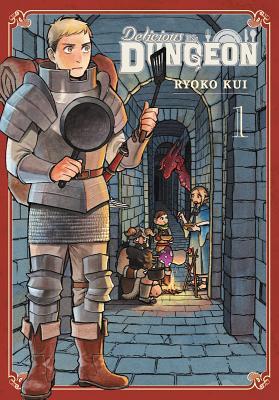 When young adventurer Laios and his company are attacked and soundly thrashed by a dragon deep in a dungeon, the party loses all its money and provisions…and a member! They’re eager to go back and save her, but there is just one problem: If they set out with no food or coin to speak of, they’re sure to starve on the way! But Laios comes up with a brilliant idea: “Let’s eat the monsters!” Slimes, basilisks, and even dragons…none are safe from the appetites of these dungeon-crawling gourmands!

This particular manga was a bit of humor and a bit of action. I enjoyed the recipes for the dungeon monster meals. This volume included the first 7 chapters, and I feel like I’m starting to get a grasp on the characters, but I’m still not completely solid on who they are. Hopefully that comes in time.

I loved the recipes at the end of each chapter. That was definitely one of my favorite parts of this one. The idea of going deeper and deeper into a dungeon and surviving purely on what they find and/or kill while down there is an utterly fascinating concept. I mean, I know there have plenty of times in D&D campaigns where we adventurers have had to worry about food for survival. Well, except for the times when there is a cleric in the party who can simply cast the spell “Create Food and Water,” which makes survival a lot easier. But anyway, it is easy to think that this would be something similar to what adventurers in D&D would resort to in a ration shortage situation.

Like I said before, I’m just starting to get an idea for the characters. I feel like their development has been pretty slow, which isn’t necessarily a bad thing, but with most manga I read, I feel like I connect with at least one of the characters pretty quickly and that holds me over until more of the cast grabs my attention.

Still, there was enough humor and interest in this to make me want to keep going, especially seeing as how there are only six volumes out of this so far. Catching up is something that shouldn’t take too long.

You can pick up this volume from Amazon, Barnes & Noble, Books-a-million, Book Depository, or your local independent bookstore.