Hey guys Damian here, hitting the late night oil with some cosplay ideas and practicing with new material. Don’t think I’m doing too bad and with D&D tomorrow it should be fun. Not really able to sleep tonight but I’ll do my best to stay up and do this review. 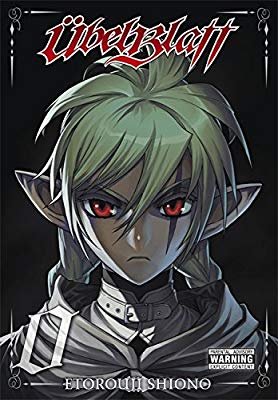 Rumors stir throughout the land: when the wielder of the black sword draws his dark blade, all who stand in its path are torn asunder…!Koinzell, the mysterious young boy who carries the black sword, undeniably wields it with exceptional skill, but can he truly be responsible for the bloody rumors? Pursued by the Traitorous Lances, four powerful warriors who were thought to have been defeated by the Seven Heroes, the strength of the young swordsman will be tested to its limit. At battle’s end, only the shocking truth of Koinzell’s quest will stand above the corpses of his enemies…An epic fantasy on the grandest of scales!

Okay so I had been going back to this one repeatedly at the bookstore and when I finally got ahold of it I was not expecting such a good read. As it is a 0 volume I feel it was a bit scattered, but at least by the time I reached the end it was less so. We get a mysterious young man with even even more mysterious past and when it is revealed I wasn’t too surprised, but I enjoyed it none the less. Do note this is rated as M for mature and it does have explicit content so keep that in mind. I think what got me so interested was the fact that it was Volume 0 and has a lot of story to cover, not to mention you a get a map of part if the world that this takes place in which is always a cool feature. Anyway this is a recommended read for sure esspecially if you like the fantasy genre of manga.

View all posts by damiantrypp