Hey all Dani (and Damian) here.

It has been a couple eventful days already, but it started with what we’ll call Gen Con Day Zero. The day before the convention officially starts is a day to pick up your badge and tickets early, find some awesome random nerds sitting around chatting or playing a game or two, and wandering the city, relaxing and sightseeing.

For us Day Zero was picking up tickets, going to an Irish Pub for Shepard’s Pie, going to Downtown Comics, and then going to the BCW mixer. We were invited because of all of the D&D work we do for our FLGS (Friendly Local Game Store). I was happy enough to just go and spend time with the store owners, and indulge in a nice buffet of free snack foods. But no, we were heavily encouraged to take packs of card sleeves, deck boxes, card folios, and BCW bags. It was a great time. Damian and I plan to write up reviews on the game accessories we picked up there, because we feel very privileged to have received so much merchandise.

Day Zero ended for us by midnight and then we were up at 6am to get dressed, get breakfast, and head to the convention center for the start of Day One. Oh, and both Damian and I did somewhat casual cosplays of a couple characters from the first campaign of Critical Role. He was Scanlan the Bard, and I was the Slayer’s Cake version of Vex’ahlia. Also, my only purchase outside of food for the day was a few more sets of polyhedral dice to add to my collection. I like to coordinate the dice sets I choose for each session based on the race, class, and personality of the character. 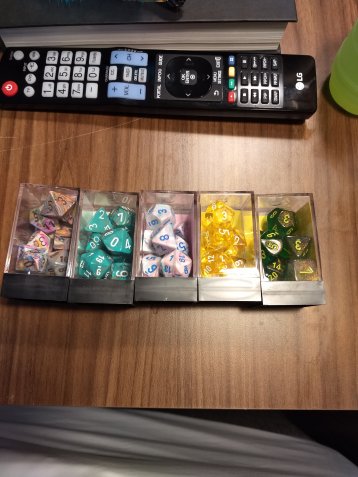 We spent most of the day apart, so I’ll try and quickly wrap up my day, and then I’ll go ahead and let Damian recount his day.

My first panel was “Patreon: Is it Right for You” with Gregory A Wilson, Shanna Germain, and Marc Tassin. It was nice to learn more about Patreon from the creator’s standpoint, and discuss how it was similar and different to Kickstarter, and how to utilize Patreon to further develop your brand and generate content your fans want to see.

After that I went to “Mastering Fiction: Worldbuilding” with Bradley P. Beaulieu, and I always love seeing different approaches to the worldbuilding process. I took quite a few notes from this panel.

From there I went to “What can SFWA do for you?” with Cat Rambo, where I learned more about the Science Fiction and Fantasy Writer’s Association. It is an organization I can benefit from, even if I don’t think I’ll qualify for membership for a long long time.

My fourth panel of the day was “When to Go Full Time: Can It Be Done?” with Kristen Britain, Susan Dennard, and Elizabeth Vaughan. This was the panel I was looking forward to the most, because I love both Kristen’s books and Susan’s books. I was incredibly lucky that they were both willing to sign books for me quickly after the panel was amazing. Also, this was a supremely eye-opening panel, because the reality is that going full-time is an incredibly chaotic and unstable path.

After that I got an hour break, which I used to take a breather, eat a snack, and then get back to the symposium hallway. My next to last panel of the day was “The Many Forms of the First Draft: Getting it on the Page” with Carol Berg, Sandra Tayler, and Elizabeth Vaughan. There are so many different ways to approach the first draft and it was so fascinating to listen to the various methods. It definitely made me feel better that pretty much every first draft I’ve written has gone together a different way.

The final panel of the day was one that Damian and I attended together: “Storybuilding in Books and Games: Dungeon Mastering for the Writer, Writing for the Dungeon Master.” This panel was run by Gregory A Wilson. Much like the worldbuilding panel, I wrote quite a few notes for this one. As both a Game/Dungeon Master and a Writer, it was really cool to see how elements of each can be utilized in the other. I’m hoping to be able to develop both my game planning and my writing using some of the advice I picked up here.

My day was spent trying to fight off this cold, because Dani passed her illness off to me. So now I’m feeling sort of crappy, especially since I ended up losing my voice. As for the panels I went to, they were mostly focused on crafting projects. I did classes on chain mail projects, and cosplay material and technique. Other than that I spent some time wandering the show floor and playtesting some games, which was pretty cool. I tried a tabletop card game that is based on God of War, and it was really cool. Then I met Dani for the storybuilding panel, which was really interesting, even if I couldn’t enjoy it fully because I really felt like crap by that point.

Our evening was spent relaxing in the hotel room, going for a soak in the hotel hot tub, and doing some more costume work so we could be ready for day two.

All right, well that’s it for now. I’ll have my standard blog post up later today, so stay tuned for my Tabletop Game Recommendations post.