At the time this post goes live, Damian and I will be getting off work, rushing home to drop off our work things and grab our convention things, and then we are driving down to Cincinnati for the weekend. It’s hopefully going to be a great time working with the folks at Colorworld Books, who are some of my favorite people. I haven’t been able to work a convention with them since 2016, so this is long overdue.

Anyway, today I’m back with another review, so let’s go ahead and get started. 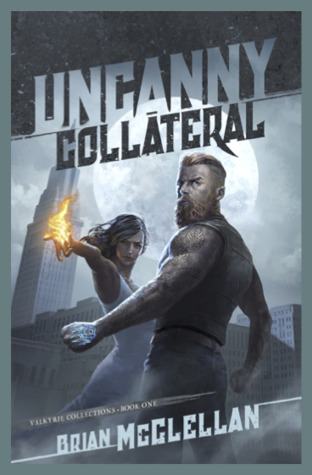 Alek Fitz is a reaper, a collection agent who works for the supernatural elements of the world, tracking down debtors and solving problems for clients as diverse as the Lords of Hell, vampires, Haitian loa, and goblins. He’s even worked for the Tooth Fairy on occasion. Based out of Cleveland, Ohio, Alek is the best in the game. As a literal slave to his job, he doesn’t have a choice.

When Death comes looking for someone to track down a thief, Alek is flung into a mess of vengeful undead, supernatural bureaucracy, and a fledgling imp war. As the consequences of failure become dire, he has few leads, and the clock is ticking. Only with the help of his friend Maggie—an ancient djinn with a complex past—can he hope to recover the stolen property, save the world, and just maybe wring a favor out of the Great Constant himself.

Firstly, this is a short novel. It was like 133 pages on my NOOK app–I was lucky enough to buy it through B&N before the author put this book into Kindle Unlimited. So overall I do believe that this story is around 45,000 words. Some would consider this more of a novella, but I’m going to just call it a short novel and be done with it. For the record, Brian McClellan said that the second story in this series is roughly 55,000 words.

Anyway, for the most part this follows a standard urban fantasy plot and characterization, which I’m not saying as a bad thing at all. The main character is a bounty hunter, and being sent out on various jobs involving a myriad of creatures can sometimes get a bit dicey. It feels like a lot of urban fantasies follow a bounty hunter or a cop or an assassin, or something similar. There’s a nice sense of familiarity in that.

Toss in the fact that the story takes place in and around Cleveland, Ohio, and I definitely felt at home. Okay, sure Cleveland is a little over two hours away from me, but I still definitely connected with the setting.

Alek was a fun main character, and it was cool that he is troll-blooded. I feel like it gives him that something special to separate him from a mundane human. In some ways I feel like Alek would almost get along with Atticus from Kevin Hearne’s Iron Druid Chronicles. Maggie was a fun and interesting “sidekick,” though I feel like calling her that is a bit of a disservice to her greatness. Oh, and I think the Ferryman (AKA Death) was a really fun client/side character. I hope to see more of him in the future.

This story kept up a solid pace from beginning to end. I read it all in an hour or two after work last week. There were some great action scenes, a little bit of magic, and quite a bit of quip-filled banter. It was an enjoyable reading experience.

So really, I read it so quickly that it left me wanting more, and honestly I think there could have been a little more added to it. More investigation, more problems, more interactions, something to make the story a little longer.

Or hey, I guess this makes me more than ready to read the second book.

You can pick up your own copy from Amazon in either hardcover or digital. It is currently only available there due to the requirements for Kindle Unlimited.

You can also check with your local library to see if they have a digital copy.

Oh…or stay tuned for more information, because I do believe that Brian McClellan plans to run a Kickstarter campaign to help with publishing the sequel to this book.