Happy Monday, and wow, we are almost finished with 2019. I’ve got some big plans for this week, which is my last shutdown week from work. I want to keep lounging and binge-watching shows, I want to read, I want to blog, and I want to write. It’s going to be a pretty darn busy time, but that’s okay. Actually I have quite a bit of reading I still want to do today and tomorrow to finish off the year/decade. And I’ve already decided on my first read for the new year/decade, so I’m excited about that. 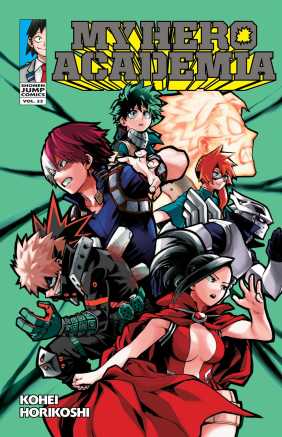 What would the world be like if 80 percent of the population manifested superpowers called “Quirks”? Heroes and villains would be battling it out everywhere! Being a hero would mean learning to use your power, but where would you go to study? The Hero Academy of course! But what would you do if you were one of the 20 percent who were born Quirkless?

In the third match of the joint battle training, the students of Class 1-A have their hands full dealing with the unexpected creativity of Class B’s Quirk use. These matches give everyone a chance to reflect on exactly where they all stand in comparison to each other and on the events in their lives that have brought them to this point. Then it’s time for Bakugo to show what he’s learned…

I am now completely caught up on My Hero Academia, both in terms of reading and reviewing. Damian and I still need to watch most of the current season of the anime though.

This volume was actually pretty darn good, and I thought the match-ups between Class 1-A and Class 1-B are pretty interesting. We’re starting to learn a little more about some of the 1-B kids and their Quirks, which is always fun, but I feel like it’s a lot of info to dump in a fairly short period of time.

I feel like this volume especially focuses on Todoroki, Iida, Bakugo, and Deku, and we get to see little flashbacks and moments of character development and expansion that were ultimately very intriguing. Todoroki’s issues with his father continue and I’m honestly hoping for a long road to redemption and reconnection. Iida got some advice from his brother and it really helped to improve his Quirk ability, so I’m curious to see if Tenya Iida can go the distance when it comes to taking his brother’s place.

Bakugo was honestly the shining star in this volume. Yes, he’s still an arrogant jerk, but he showed off the knowledge he’s gained as well as his ability to cooperate with others in important situations. It was rather impressive. Then there was Deku, and we got even more of a glimpse into the past of the Quirk One for All. Frankly it felt very Avatar the Last Airbender with talking to past selves, but I’m looking forward to seeing what Deku learns about it all next.

Now I just need to wait for the release of the next volume. Plus Ultra!

You can pick up your own copy of this volume from Amazon, Barnes & Noble, Books-a-million, Book Depository, or your local independent bookstore.