I hope you guys are ready for double posts every Monday, because it is starting now. Yep, that’s right. Until I get caught up on my manga review backlog, I’ll be bringing you two reviews every Monday. I’ve already planned out these posts through the end of April and it looks like the double does of manga reviews will continue until at least August…I think? Honestly that depends on how many volumes I read over the next several months. Have I mentioned that with a standard 200 page volume it only takes me like 30 minutes to read it? So when I decide to sit down and marathon a stack of manga, I can build up quite a list of reviews to be written.

You know, I could probably make things easier on myself by starting up a BookTube and talking about more of my reads and reviews there, but I already know that I just do not have the kind of free time in my life to manage the filming, editing, and other upkeep for a channel on YouTube. Unless I cut back on my blogging time. But I really enjoy my blog. But I don’t know, I’d also kind of like to do reading vlogs, and maybe some other geeky topic discussions on a channel, so Damian and I still might start a channel in the future.

Anyway, let’s jump into today’s Manga Review. It’s the only one today because I also had my Calendar Girls post go live earlier, but a lot more manga talk is coming. Let’s get started. 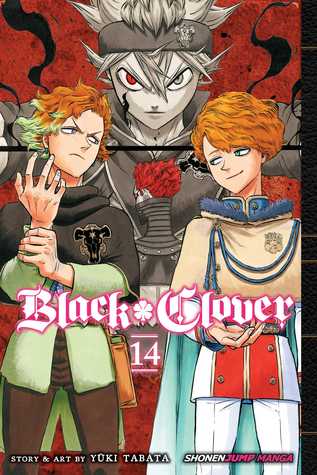 In a world of magic, Asta, a boy with anti-magic powers, will do whatever it takes to become the Wizard King!

Asta is a young boy who dreams of becoming the greatest mage in the kingdom. Only one problem—he can’t use any magic! Luckily for Asta, he receives the incredibly rare five-leaf clover grimoire that gives him the power of anti-magic. Can someone who can’t use magic really become the Wizard King? One thing’s for sure—Asta will never give up!

Asta and his teammates move on to the second round of the Royal Knights Selection Test, but have they finally met their match? They’ll have to go all-out if they hope to beat teams made up of some of the strongest Magic Knights in the Clover Kingdom!

I read this as part of Dewey’s 24 Hour Readathon in Oct 2019, and this was one of the readathon situations where I knew I didn’t have a whole lot of time to dedicate to reading but I still wanted to accomplish a lot. So I grabbed a stack of manga and read like 7 or 8 of them in one day. This is how my backlogs happen.

What can I say, though, because I love to read. I especially love this series. Black Clover is pretty much my manga/anime obsession right now. Don’t get me wrong, I still love Fairy Tail and there’s quite a few other series that I deeply care for, but the wonderful rag-tag misfit group that is the Black Bulls have won over my top spot for manga in my heart, and frankly they will be tough to beat.

Haha, that’s funny, because they’re pretty tough to beat in the series, not because they’re necessarily the strongest, but because of their determination and their drive to never give up. They fight to protect the common people and to protect their friends. And they’ve come up against some really challenging opponents, and so far they’ve been able to find a way to succeed.

This current story arc has several members competing in the trials to become Royal Knights, while other members are still somewhat occupied with the whole elf reincarnation story arc. Considering that I’ve read through volume 19, I already know that these two story lines end up colliding, but I’m trying to focus just on this particular volume.

The second round of the trials gets even more difficult because everyone has gotten to watch their opponents fight through the first round, so strategy becomes an even more important part of each match-up. But personal struggles also play a part.

That is especially true for Black Bulls member Finral, who has always been treated as less powerful and less important than his younger brother Langris, who he now gets to face in the trials. Since I’ve been following the Black Bulls for a while, I know how valuable Finral is to the team, and not just as someone who can transport them wherever they need to go. There is more to his magic than that, and he has been learning and getting stronger, because recent challenges have made that necessary.

I really feel for him and his story, and I really hope that there will be a part where his family will recognize his true talent and skill. It won’t make up for how they’ve treated him for years, but I think it might be important for Finral to have them see that he is more than just a taxi service.

Anyway, I am completely obsessed with this series, and I love how this trial arc shows so many of these Magic Knights pulling out all sorts of fancy and powerful magic and magic combos with their teammates. It’s an interesting break from the life and death situations and attacks that have happened so frequently…though I think everyone realizes it’s just a matter of time before it happens again.

You can grab your own copy of this book from Amazon, Barnes & Noble, Books-a-million, Book Depository, or your local independent bookstore through IndieBound.