I hope you are all having a lovely day. I’m actually hoping to get to bed at a decent hour tonight, because Dewey’s 24 Hour Readathon starts for me tomorrow at 8am, and I want to try and read as much as possible during this readathon. But that also means that I have some reading still to accomplish tonight, as well as a couple blog posts to write up. It’s going to be a little bit of a busy evening for me, but that’s fine.

We went out to support a couple local businesses today. There’s a root beer stand and we can go there and feel somewhat normal while also maintaining a social distance because you drive up into a spot, order your food, it’s brought to your car, and then you eat in your car. It is great. But we only got a couple appetizers and a couple small root beers. The reason for that is we also wanted to support a local Mexican restaurant because they are doing contactless carryout–including the option to order two alcoholic margaritas per meal ordered.

Honestly we haven’t done a lot of ordering carryout or anything, and we live outside of the range of pretty much all delivery, so we’ve been saving quite a bit of money by not buying more food. So, it was worth it to do this little food splurge right now. 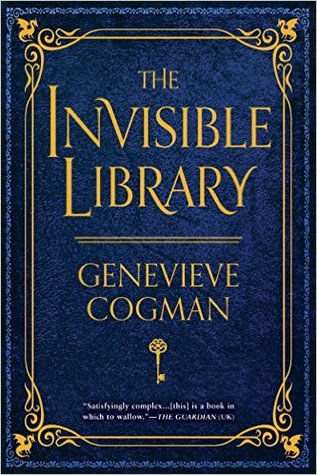 Collecting books can be a dangerous prospect in this fun, time-traveling, fantasy adventure from a spectacular debut author.

One thing any Librarian will tell you: the truth is much stranger than fiction…

Irene is a professional spy for the mysterious Library, a shadowy organization that collects important works of fiction from all of the different realities. Most recently, she and her enigmatic assistant Kai have been sent to an alternative London. Their mission: Retrieve a particularly dangerous book. The problem: By the time they arrive, it’s already been stolen.

London’s underground factions are prepared to fight to the death to find the tome before Irene and Kai do, a problem compounded by the fact that this world is chaos-infested—the laws of nature bent to allow supernatural creatures and unpredictable magic to run rampant. To make matters worse, Kai is hiding something—secrets that could be just as volatile as the chaos-filled world itself.

Now Irene is caught in a puzzling web of deadly danger, conflicting clues, and sinister secret societies. And failure is not an option—because it isn’t just Irene’s reputation at stake, it’s the nature of reality itself…

I have owned this book for a couple years now…and have proceeded to buy every other release in the series, despite never reading any of them. But I could tell that the concept is one that I would enjoy, so I wanted to keep up with the releases so I could binge them when I finally got around to it.

As it turns out, that time is now for National Library Week. This book is something I would say is perfect for someone who is a fan of “The Librarian” TV movies, “The Librarians” series, “Doctor Who,” or the Shades of Magic series by V.E. Schwab, then this just might be a series you would be interested in as well.

Having all the different parallel worlds and a powerful Library that basically resides in-between dimensions is pretty cool already. Then throw in complicated worlds of order or chaos, magic and/or technology, and complicated people with varying levels of secret and a diverse set of knowledge and skills. It was fascinating.

Yes it took me a little bit to adjust to the world and the characters, but after that I really flew through this book.

I think that Irene and Kai are fun characters, and I can’t wait to see where their adventures take them next.

You can grab your own copy of this book from Amazon, Barnes & Noble, Books-a-million, Book Depository, or your local independent bookstore through IndieBound.

6 thoughts on “Review: The Invisible Library by Genevieve Cogman”