Why hello again, I’m back again already. I guess that’s to be expected because it is Manga Monday, and I have a lot of volumes I still need to write reviews for. I’ll definitely be able to keep going with these posts for quite some time, even if I lag in other post areas. Though I still have some backlist book reviews I need to write, so perhaps I’ll worry about writing those for right now so I can keep getting content posted.

But I still need to get in my novel writing time for today, so I’m not going to spend too much time with this blog review post. So, without any further ado, let’s just go ahead and get started. 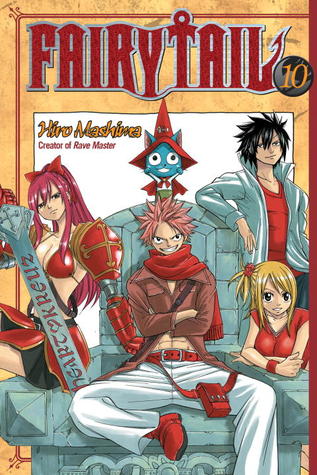 Story and Art by: Hiro Mashima

SHADOWS OF THE PAST

Erza Scarlet is the most kick-butt woman wizard in Fairy Tail, but in the past this indomitable fighter was . . . a slave? Now she finds out that her old companions have completed the evil device they were forced to build while held in slavery: the Tower of Heaven. What’s more, their wicked master requires a sacrifice: Erza!

Includes special extras after the story!

Now we’re getting into the Erza/Tower of Heaven story arc, which is intense…though honestly not as intense as some of the later arcs. But, for the early game of Fairy Tail it was a big deal. It also told us a lot about Erza’s backstory, and considering that she is one of my favorite characters, this is an arc that I was really invested in.

I feel like most of the early story arcs in the manga take like 2-4 volumes to get through, so in some ways it feels like they are longer in the anime, when honestly they are probably fairly similar despite the differences in format and story delivery.

Still, we get into a lot of information simply with this volume. I mean in this volume we find out that Erza was a slave when she was a child, and that the project she had been forced to help build all those years ago has actually been continuing and it has finally been finished.

This is where we get to meet Simon and Milliana and Jellal, and this arc is where we learn why Erza came to Fairy Tail to begin with. Honestly it was fun to read this volume, because it has been a while since I watched this section of the show, and so I had forgotten a lot of things.

I like that no matter what, it seems like each volume of “Fairy Tail” has a little bit of action, some little character revelations, and a deepening understanding of characters and story and guild mentality. Such is the power of the Fairy Tail guild.

You can pick up your own copy of this book from Amazon, Barnes & Noble, Books-a-million, Book Depository, or from your local indie bookstore through IndieBound.